Q: Is Cambodia a Buddhist nation?

A: Buddhism is the official religion of Cambodia (97% of the population profess to be Buddhists), but Cambodians have the right to choose their own faith.

Q: How many Cambodians are Christians?

A: Less than 1%…but the number is growing.

Q: What do most Cambodians think about the Christian faith?

A: Most think Christianity is a Western religion. Cambodia has long identified as a Buddhist nation, with many daily activities and special events like weddings and funerals involving Buddhist rituals.

Q: How does this impact Christians in Cambodia?

A: Many families are Buddhists and their activities focus on Buddha. During the celebration of the Khmer New Year or religious holidays, families expect all members to adhere to Buddhist traditions, but Christians can’t. It is sad when siblings choose not to attend a family member’s wedding because the bride and groom insist on a Christian ceremony, which is common.

Q: Besides FM and Shortwave radio broadcasts, FEBC Cambodia’s team are finding much success at reaching young Cambodians through social media. Are younger people more open to the Good News?

A: Yes, younger people are more educated than older Cambodians, and this helps them discern the truth about God. Also, they are growing up at a time when people have the freedom to choose what faith to follow. Older people only know one way, which is to honor Buddha; it’s not easy for them to open their heart to God. But we are seeing encouraging changes taking place in Cambodia!

Summary of FEBC’s Work in Cambodia

In March 2002, Family FM 99.5 went on the air using a 500-watt transmitter. In January 2004, Family FM began broadcasting via a 10-kilowatt transmitter, allowing the station to reach a potential audience of half the country’s population. In November 2014, a new 10 kilowatt Nautel transmitter was installed, allowing Family FM to reach almost 2/3 of Cambodia’s population. In October 2016, a 500 watt relay station in Kampong Thom Province was launched (99.8) to reach provinces previously unreachable. 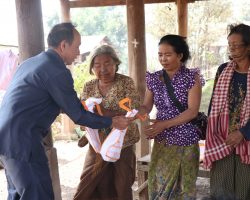 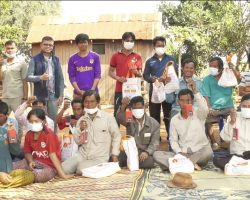 Where Roads are Scarce 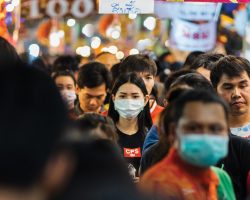 FEBC’s Role During the Pandemic

Your generosity today will help reach the unreached with the Gospel through radio broadcasts and digital media in over 141 languages in 50 countries.