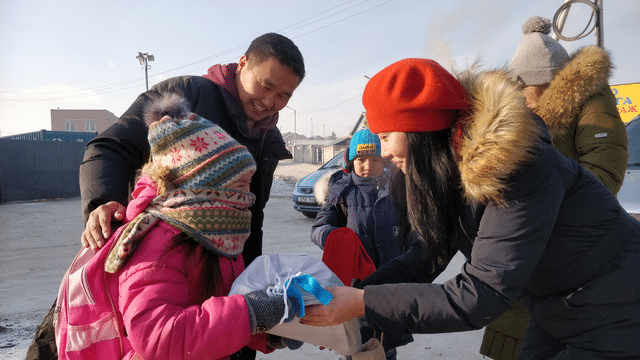 FEBC’s teams in Mongolia and Japan worked particularly hard during this holiday season to spread the Word and love of Christ to their communities. Stations in both countries aired special programs, including music centered upon the true meaning of Christmas. FEBC Mongolia also distributed 150 gifts, especially warm clothing, to needy children in Ulaanbaatar.

During the days leading up to Christmas, FEBC’s Mongolia team led a “Warm Christmas” campaign in Ulaanbaatar during the holiday season. The campaign asked listeners, business and well-wishers in the area to donate “warm” items, such as hats and scarves. These items were handed out to children of the ger district in Nalaikh, and also any children seen walking home from school without warm clothing. Some toys, books and goodies were also handed out alongside the warm items.

On Christmas Day, FEBC’s Mongolia team led the way in broadcasting their “True Christmas” radio campaign, which even aired on 10 secular FM stations in Ulaanbaatar. The hour-long “True Christmas” program featured the Gospel message, Christmas music, and a short drama depicting the birth of Jesus.

The true meaning of Christmas was also broadcasted on the air in Japan.

On December 23, FEBC’s Japan team aired a special Christmas worship program featuring everything from popular Christmas hymns to Gregorian chants. During the program, Rev. Tom Sacon, a leading Old Testament scholar, preached about “The Mystery of His Incarnation.” Rev. Sacon’s sermon referred to a work by Mr. Kazuo Ishiguro, who won the Nobel Prize in Literature last year.

“We are so glad we can worship Him with our listeners via our radio and the Internet programs,” FEBC’s Japan director, Takanori Nagakura, wrote, “especially those who cannot go to church for various reasons. We are glad you and your faithful supporters always remember our ministry in your prayers!”

FEBC’s teams in Japan and Mongolia would like to thank all of our faithful supporters for their prayers during this Christmas season as we preach the Gospel to many who have never heard.